• Markets were up 0.87% last week after a 0.76% gain on Thursday after Treasury Secretary Mnuchin reiterated the administration’s commitment to tax reform this year. No, this isn’t a market update from February; Mnuchin continues to emphasize tax reform, and each time markets have rallied on the comments. There is still no concrete evidence surrounding a plan, as the administration has focused its efforts on new health care reform.
o A total of 64 companies in the S&P 500 reported this week, and earnings growth has been largely better than expected so far as 51 of the 64 beat expectations. Banks have been the first major group to report, and the results have largely continued the trend of the last three quarters wherein EPS beats expectations due to a continued increase in trading revenue. This quarter, the increase was not nearly as widespread across banks as markets were fairly calm and uneventful during the first quarter.

• Interest rates were slightly down last week as markets digested the poor economic data from Friday, April 14 and as last week’s data was fairly calm.10-year breakeven inflation fell to 1.85% as the worse than expected CPI and decline in oil prices helped push inflation expectations lower. This is the lowest level for inflation expectations since the November election.

• The dollar was slightly weaker versus the euro due to the negative economic data discussed above, finishing down 1.04% to 1.08. However, the dollar did manage to strengthen versus the yen as the flight to safety trade paused in the risk-on environment.
• The pound was much stronger this week after Theresa May unveiled plans for the United Kingdom to hold snap elections on June 8th. The election aims to serve two purposes for May. First, she would like to receive a mandate from the British people. She is an unelected leader with no formal mandate, and before heading into the most important political negotiation in recent history, she wishes to have the directive of the British people in focus during the process. Second, her Conservative party has a much stronger backing now than it did last summer. May plans to use these polling numbers, and the demise of the second place Labor party, to strengthen the Conservative majority in parliament and allow her to strengthen her negotiating power.

• Oil experienced its second worst weekly decline of the year last week, decreasing by 6.69% to $49.62. The inventory report was mixed, as overall inventories came in almost exactly as expected and there was a surprise 778k withdrawal from Cushing. The withdrawal can be explained by the 1.9% increase in refinery utilization, which led to a surprise inventory build in gasoline. This means that overall crude inventories would have likely built more than expected had it not been for the increase in refinery utilization. This, combined with the continually increasing US production and rig count, was the main driver for the decrease last week.

• The economic calendar is extremely busy this week, with first quarter GDP on Friday highlighting the releases. The Atlanta Fed GDPNow estimate expects just 0.5% growth for Q1, while the NYFed Nowcast expects 2.7% growth.
• In one of the busiest weeks of the quarter, 186 companies in the S&P 500 will report first quarter earnings this week.
• The European Central Bank meets on Thursday, but no changes in policy are expected. 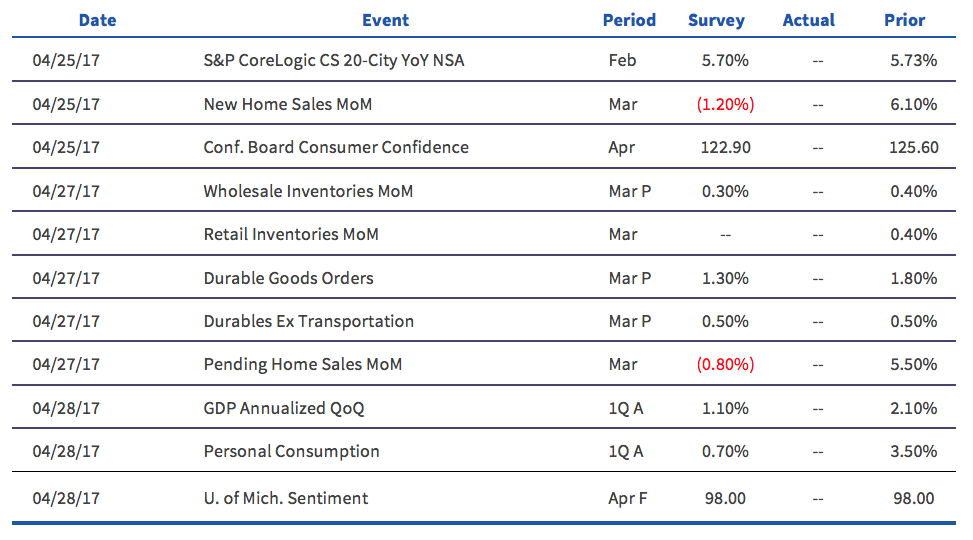